At 13:34 today, West Yorkshire Police​ alerted CVSRT to an incident involving a mountain biker who had fallen off his bike whilst negotiating a technical section of a cycle trail and fell approx. 10metres down a steep banking. Details of exact location or potential injuries were initially vague, therefore various emergency resources were deployed to the scene whilst more details were confirmed.

Emergency services on-scene established that the rider was stuck down the enbankment, hence the call for assistance, but unhurt. He was rescued by WYFRS Technical Rescue and checked over for injuries by our team doctor and paramedic, but thankfully required no medical assistance.

Team members stood down and returned to base, then onward to their homes or places of work. 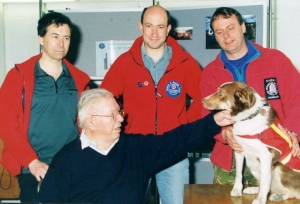 To mark our 50th Anniversary, we’ve collated a selection of notable incidents from over the 50 years which have been published in a limited edition booklet.

One such incident was the search and rescue of Sir Fred Hoyle on 24th November 1997, who went missing whilst out walking near his childhood home at Eldwick, Bingley. Sir Fred was a famous physicist and arguably the most important astronomer of the last century, after Albert Einstein.

Calder Valley Search and Rescue Team were called to assist with the search for Sir Fred who had been missing for over 10hrs. He was eventually found in the early hours after a long night searching at Shipley Glen by Search dog “Tip” and handler Simon Adams, with navigator Martin Woodhead.

Simon recalls how he and Martin had been tasked with clearing the valley bottom;

“We had just received a stand down from control and at this point the dog teams were nearing the end of their search area. Search dog handler, Ellie Sherwin passed on the message that the dog teams would clear the remainder of their area before standing down.”

“Two minutes later we found Sir Fred Hoyle. He was lying on his back in the stream at the bottom of the glen. Martin moved in and quickly assessed the situation while I radioed control to tell them we had found him.”

“Ellie’s search dog unit guided other team members and equipment in to the casualty site and, in what seemed a very short time, the casualty was being delivered to the open doors of a WYMAS ambulance. A hard night’s work with an excellent result.”

Sir Fred was taken to Bradford Royal Infirmary where the 82-year-old received treatment for a dislocated shoulder and hypothermia. Thankfully he survived his ordeal and when fully recovered, visited our base to meet his rescuers.

Following confirmed sightings of the missing male on CCTV footage, a new search area was identified and CVSRT were called to assist West Yorkshire Police to search and clear the new area in the hope of finding James Gray.

All areas were search and cleared. Police enquiries continued.

Following developments in the investigation West Yorkshire Police have released a statement:
http://www.westyorkshire.police.uk/news/update-police-searching-missing-james-gray-find-mans-body

CVSRT would like to offer their condolences to James’ family and friends at this difficult time. 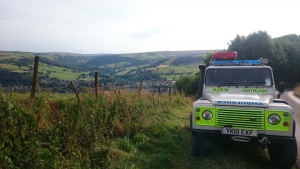 CVSRT received a request from West Yorkshire Police to assist with the ongoing search for a missing vulnerable person from Mytholmroyd. James Gray (39yo) was last seen on Monday 22nd August at 06:23am.

35 team members and 3 search dogs were tasked with searching open areas and dense woodland around the last known location. All areas cleared and the missing male was not found, therefore team stood down for the evening and Police enquiries continued.

CVSRT were called by Yorkshire Ambulance Service to help with the evacuation of a vulnerable male who was found down an embankment near the canal and in need of urgent medical assistance.

On arrival, team members used the scoop board to lift the casualty onto our stretcher for a short carry to the ambulance.

CVSRT were called by West Yorkshire Police to continue the search for the missing 75yo Granville Muir from Halifax. Team members were tasked to search woodland and surrounding overgrown areas from Norland to Sowerby Bridge and Copley.

All areas successfully searched and cleared with no conclusion. Police enquiries continue. 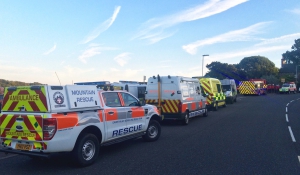 Just as team members arrived for the monthly maintenance at our Mytholmroyd base, an urgent call from Yorkshire Ambulance Service was received for assistance with the evacuation of an 85yo man who had fallen over a wall and down the very steep embankment from Dudwell Lane towards the railway. Due to the precarious location of the casualty, the full team was immediately deployed.

As CVSRT members arrived at the location, it became apparent that the emergency services on-scene already had the incident under control. A handful of team members were tasked to assist with the stretcher carry at trackside, whilst the majority team members stood down.

Once the casualty was safely evacuated from the railway line and loaded into the ambulance, team members returned to base to complete the maintenance of vehicles and equipment.

Thankfully Granville Muir was found alive but fragile by his granddaughter on Wednesday 10th August at 7.45pm.

Here is a message of thanks from West Yorkshire Police:

West Yorkshire Police would like to thank everyone who helped in the massive police search for a Halifax grandad.

Granville Muir, 75, was reported missing on Saturday morning and concerns were growing for his well-being. A massive police search was launched to try and find him involving district officers as well as specialist search and rescue resources including the mounted section, dog unit and NPAS helicopter. Partners from the West Yorkshire Fire and Rescue Service, Calder Valley Search and Rescue Team (an organisation made up entirely of volunteers) and British Transport Police also provided invaluable help.

The Force was also supported by members of the media who featured police appeals and members of the public who shared and retweeted appeals that went out on facebook, twitter and youtube.

Mr Muir was found safe and well, although a little dehydrated and fragile at 745pm on Wednesday in a field off of Scarr Bottom Road, Halifax. He was taken to hospital where he is recovering well from his ordeal.

"We were growing very concerned for Granville so I am delighted to report a happy ending. On behalf of the Calderdale District and Adele Muir (Granville's daughter) I would like to thank everyone who helped in the search. It truly was a team effort with everyone working together on behalf of a vulnerable missing man.

"The fact that we have been able to return Granville to his children and grand children is thanks to that effort and hard work, with people going above and beyond to help.

"I also want to pay tribute to the media who ran our appeals and everyone who shared our messages through social media channels - the response from people was nothing short of phenomenal and really helped when time was of critical importance. It just shows the power of social media in particular to help in police operations."

Team members were tasked with searching densely overgrown woodland and walking routes the missing man was known to use regular. Mid-way through the afternoon, the team received information of a possible sighting outside the search zone but within an area with significance to the missing gentleman. One member was already in that location and four more members deployed to follow up the lead.

Whilst en-route, team members from Calder Mobile 3 noticed a young cyclist laying on the ground at the side of the road following a collision with a wall (Incident 955).

Team members promptly stopped to provide medical assistance until the Yorkshire Ambulance Service crew arrived and then assisted with loading the casualty into the ambulance for further treatment.

Unfortunately the possible sighting of the missing gentleman in Greetland wasn’t him, so team members returned to continue the search at the original location in Halifax.

By 23:15, team members had extensively searched all the areas of interest without finding Mr Muir and were stood down whilst police enquiries continued. CVSRT would like to thank Kinder MRT and Swaledale MRT for providing a search dog and handler from each to assist with the search.

If anyone knows the whereabouts of Mr Granville Muir or has seen him recently, please call 101 quoting log 1491.

At 1am, 13 members were deployed to assist West Yorkshire Police with the search for the missing gentleman. After searching and clearing areas of interest, the team stood down at 4.15am. Police enquiries are on going.

If anyone has seen or knows the whereabouts of 75yo Granville Muir who went missing yesterday afternoon at 1pm from his home address in King Cross, please call 101 and quote Log 1491.