Yesterday Calder Valley Search & Rescue Team (CVSRT) did a ‘takeover’ at Centre Vale parkrun #18. We provided 13 volunteers to work alongside the Centre Vale core team and make the run happen.

We also served lots of lovely homemade baked goods at the finish. It wasn’t too long before the phrase ‘takeover’ had been replaced by ‘cakeover’!

The aim for CVSRT was to promote our up and coming fundraiser, the Yorkshire Downhill Time Trial 2019 (YDTT) being held on 14th September. An event all about the thrill of downhill running. Each runner gets two timed runs down the 1.5km course, which has 160m of descent.

Thanks to the 134 people who ran, jogged and walked the parkrun course - 45 were first timers and 39 recorded new personal bests (well done!). We had a brilliant time meeting you all and saw some inspiring performances. Hope to see lots of you at the YDTT. 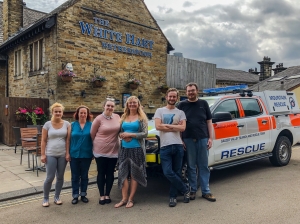 On the 3rd July eight staff from The White Hart, Todmorden laced up their boots and took part in a ‘Sponsored Stroll’ to raise funds for Calder Valley Search and Rescue Team.

They set off bright and breezy in the morning and strolled from The White Hart to The Commercial in Sowerby Bridge, AND BACK! A whopping 18.4 miles in total.

Back safely in Todmorden by 8pm, they raised a fantastic total of £189.00 in the process.

As a self-funded voluntary organisation, CVSRT relies on the generosity and support of the community to raise the £40,000 we need to keep the team operational. So thank-you to Chloe, Pamela, Sarah, Wendy, Alan, Nathan, Sammy and Leanne, we really appreciate the effort and determination you put in to raise this money, and to all who donated.

If you fancy doing a sponsored challenge or wish to hold a charity event to help raise funds for the team tell us about your idea and we will help to promote your challenge or event. We use a fundraising website called Wonderful which allows you to create your own fundraising page for CVSRT - which makes collecting sponsorship money so much easier!

All details were kept top secret until a week before the event. An eagerly awaited email from Team Leader Ben, confirmed the main theme for the challenge... fitness!

We regularly work alongside West Yorkshire Police (WYP), Yorkshire Air Ambulance (YAA) and the Yorkshire Ambulance Service (YAS) Hazardous Area Response Team (HART), who have an annual (or more frequent) basic fitness test. So with help from the HART Physical Trainer a range of tests were designed to reflect the physical demands of our work.

This tends to be bursts of energy, followed by standing around, before another burst of energy. This can be quite demanding, especially when you factor in carrying personal or team equipment and a casualty on a stretcher.

We were told not to worry, no one had to be a racing snake (though we have quite a few of those!) as we would be taking part in sections, with our individual times averaged. Section 5, consisting of our Team Leader, Deputy Team Leader and five trainees was earmarked as the one everyone wanted to beat or rather not get beaten by. Not that we’re competitive or anything!

Our challenges were; Stretcher Test - a timed test to assemble two team stretchers, complete an obstacle course with each stretcher (+load) and dismantle them.

Rope Test - a timed test to set up our standard rope system used to lower and raise a stretcher.

Bleep Test - based on WYP requirements for their search teams we had to reach level 6.3, which is around 5 minutes of effort. The CVSRT average was 8.5, and the best was 12.2!

YAA/HART Test - a timed test carrying a fell party kit and items in both hands around a 20m course, and completing simple medical skills. The requirement is to finish in under 14min. The CVSRT average was 9min 20s, and the fastest 7min 34s!

And guess who won?! Section 5!

A HUGE thank-you to everyone involved in organising and running the event. It was an extremely enjoyable, but tiring, night.

Thanks also to The Craggs Country Business Park for hosting the event. And a BIG thank you to our friends Craggies Café, Butchery and Deli for keeping us fuelled with pie and peas, and Vocation Brewery for keeping us hydrated with craft beer.