At 17:03 on Monday 26th August CVSRT received a second request from Yorkshire Ambulance Service to assist with the location and evacuation of a young male who had sustained a suspected closed lower leg fracture whilst at Gorple Stones. The casualty (along with a group of friends) were unfamiliar with the area and initially gave their location as Widdop Reservoir.

First team members at the reservoir were deployed to locate the casualty, whilst the remaining members made their way in 4x4 vehicles along the bridleway. First on-scene was Search Dog ‘Jack’ with handler Dave, followed shortly after by a team doctor.

Once the casualty had received pain relief and had his leg splinted, he was packaged and stretchered a short distance to Calder Mobile 2 and driven from the moors to the ambulance waiting at the main road.

At 15:12 on Monday 26th August Calder Valley Search and Rescue Team received a request from Yorkshire Ambulance Service to assist with the evacuation of a crag fast young man in Colden Clough. 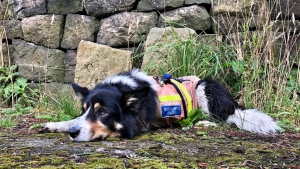 At 05:45 on Saturday Calder Valley Search and Rescue Team received a request to assist West Yorkshire Police search for a 65yo man who has gone missing from his home in a rural area of Todmorden. 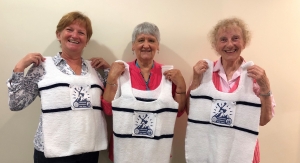 Thanks to the talented ladies at Todmorden Health Centre Champions ‘Knit or Natter’ group who knitted these fantastic running vests for our forthcoming fundraiser the Yorkshire Downhill Time Trial 2019 (Sat 14 September). Places are still available!

The vests were knitted by Pam, Joyce, Sylvia, Glenda and Deb. When not knitting running vests they knit for friends, family, and hats and blankets for the Special Care Baby Unit at Calderdale & Huddersfield NHS Foundation Trust Calderdale Royal Hospital.

Every Wednesday afternoon knitters, crocheters, embroiderers, and chit chatterers meet between 1:30pm and 3:30pm at Todmorden Health Centre in the Health Promotion Room.

Donations of tea, coffee, biscuits or materials to the ‘Knit or Natter’ group would be gratefully received

At 11:01 on Thursday 15th August Calder Valley Search and Rescue Team received a request from neighbouring team, Rossendale and Pendle Mountain Rescue Team, to assist with the ongoing search for a missing person. Eleven CVSRT members responded to the incident in Accrington. 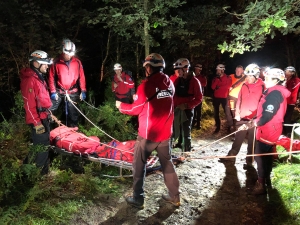 34 CVSRT members were available to respond and deployed in team vehicles or attended directly to the incident.

On arrival at the scene CVSRT began an extensive search of the area. Approximately two hours into the search a fell party heard shouts from the casualty and was able to make verbal contact with them from across Colden Water.

The casualty was assessed by CVSRT members. Following on-scene treatment the casualty was packaged and placed on a stretcher which had been lowered down the steep slope using a rope rescue system.

The rope rescue system was then used to haul the stretcher up a steep slope to safe ground above. The casualty was transferred to a wheeled-stretcher and wheeled approximately 1.5 kilometres to a YAS ambulance crew waiting at the nearest road head.

At 02:03 on Friday 9th August Calder Valley Search and Rescue Team received a request from Yorkshire Ambulance Service to assist with the evacuation of a female who had fallen down a steep banking. Eighteen CVSRT members responded to in the incident in Mytholmroyd. 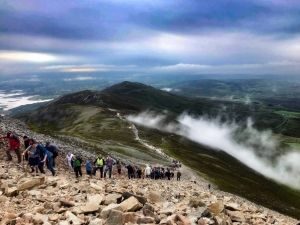 During the last weekend in July Calder Valley Search & Rescue Team (CVSRT) trainees Ed, Gareth, Isobel, Josh and Pete headed off to take part in a multi-agency operation in County Mayo, Ireland. Here's an account of their weekend.....

Sat on the sofa on a lovely, snowy, Sunday morning with a cup of tea. Dog suitably tired from his walk and I’m checking my emails every five minutes. It was the day after our initial trainee assessment. I was looking for one email in particular from Les (our trainer) to see if I passed the assessment to be a trainee member CVSRT.

It’s incredible to think that this was six months ago and the start of our journey to become probationary members of CVSRT. The last six months have been packed with training building up to being added to the call out list.

The last milestone before we go ‘on call’ is a weekend trip to Ireland to support our friends in the Dublin-Wicklow Mountain Rescue Team (DWMRT) as they head over to #CountyMayo to provide safety cover at #ReekSunday, an annual day of pilgrimage in #Ireland.

On Friday 26th July we met at RP90 (our headquarters in Mytholmroyd) at 10:30, loaded the cars up and headed for Liverpool Airport. Kitted out in fresh team kit we all flew through security with priority passes in hand. We had a quick drink and then onto the plane.

A short and uneventful journey saw us arriving at Knock. Hire cars collected, our next stop was Westport Lidl to purchase supplies. As we left Westport for our accommodation, the heavens opened and with it our first views of #CroaghPatrick disappeared under a blanket of cloud.

A wonderfully warm welcome was next in store as we checked into the hostel. We dropped our bags and headed to the kitchen for a drink and briefing on the next two days. The rain then stopped and it was nice enough to sit outside the local pub for a pint (or two) of #Guinness. What else could we order!

We enjoyed the Guinness a little too much and missed our chance to order some food so it was a dash back to the hostel for some cheese on toast before settling down for the night.

We had a leisurely start to Saturday as training was from 10am, allowing more of the DWMRT to arrive. Training started with an intro to the stretcher we’d be using over the weekend – a Basket Stretcher with a huge fat bike wheel! We practiced using the stretcher on some steep ground and then gathered for a session on taking a casualty’s pulse and fitting/removing both a vacuum leg and vacuum arm splint.

Next up was practicing a few techniques to aid raising and lowering a stretcher on steep ground. This was a useful refresher on these skills and an opportunity to mix in with the DWMRT and work together on scenarios that we could likely be faced with during the pilgrimage.

Training complete, we had a few snacks and then walked up Croagh Patrick. The sun was in full force and it was a lovely walk up to the peak of Ireland’s holiest mountain. The main path was a very rocky affair, which after the halfway point, increased in steepness. That with a lack of grip made it challenging.

We timed the walk perfectly as we were treated to a fly over, land and take off of a supporting helicopter as it delivered supplies ready for Sunday. That said, there were already hundreds of walkers on the hill making their reach for the top, including several in bare feet!

The summit greeted us with a chapel, a toilet and amazing views of the surrounding area. After a brief stay at the top it was time to head back down as we had a date with food and this time, we were not going to miss it!

The evening meal was fantastic, generously paid for by DWMRT. After fuelling up for what was to come, we had a final (non-alcoholic) night cap and headed to bed early with alarms set for 2:30am.

After the early alarm call on Sunday, we had a short drive around the valley to the Mayo Mountain Rescue (MMR) base of operations. With additional snacks loaded into our bags and a briefing from MMR we started out on the early morning shift at 4:00am, which greeted us with a dark, cloudy rain laden sky.

We hit the medical tent, around half way up the mountain, and awaited further instruction. Still dark and wet we gradually added layer on top of layer before resting in the storm shelters. It was a very cosy 45 minutes tucked up discussing how anyone could class them as four man shelters!

New instructions received, we geared up and moved to our next location. It was light by now and the rain started to ease off, but the ground was wet and we were positioned at the base of the steep loose scree section known as a black spot for slips and tumbles.

We sat and took a moment to watch the constant lines of people making their way up and down the mountain - all ages, several dogs, few in what we would describe as suitable clothing, many in trainers, some in fancy dress and even a few more, incredibly, in bare feet.

The loose scree turned out to be a particularly tricky as many walkers lost their footing as they descended. Most got back to their feet with just a little bruised pride to show for it, however, not everyone escaped unharmed. Fortunately, everyone we witnessed fall was able to make their own way back down the mountain with a little help from ourselves and the other Mountain Rescue teams on duty.

As the next radio message from base came in, instructing the DWMRT to climb further up to the next checkpoint, it was time to leave for our flight home. However, we couldn’t leave without helping them haul the stretcher and other essential kit up the loose scree to the highest point of the day.

Goodbyes done and a speedy retreat down the hill we had a few minutes back at base for a drink and STEW! Probably the best I’ve ever had.

With that it was a drive back to the airport and the 45-minute fight back to Liverpool apologising to everyone in close proximity about how bad we smelt!

Back home, clothes washed and kit bag re-packed we start the next six months of training with the additional learning curve of being on the call out list to respond to any incidents CVSRT are requested to attend.

A massive thanks to everyone in Ireland who gave us such a warm welcome and to DWMRT for their hospitality and generosity. Time now to figure out a plan to get on the flight next year! 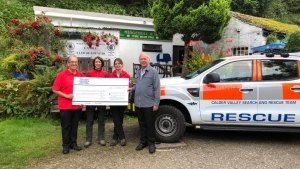 A huge thank-you to members of De Warren Masonic Lodge, Blackwell, Halifax for their generous donation of £1000. This is the second £1000 donation they have made to Calder Valley Search & Rescue Team this year!

At 15:39 on Sunday 4 August CVSRT received a request for assistance from Yorkshire Ambulance Service (YAS), which saw the team reach the milestone of 50 callouts in 2019.

Twenty-four CVSRT members responded to the incident near Oxenhope, however, we were stood down shortly after receiving the request.